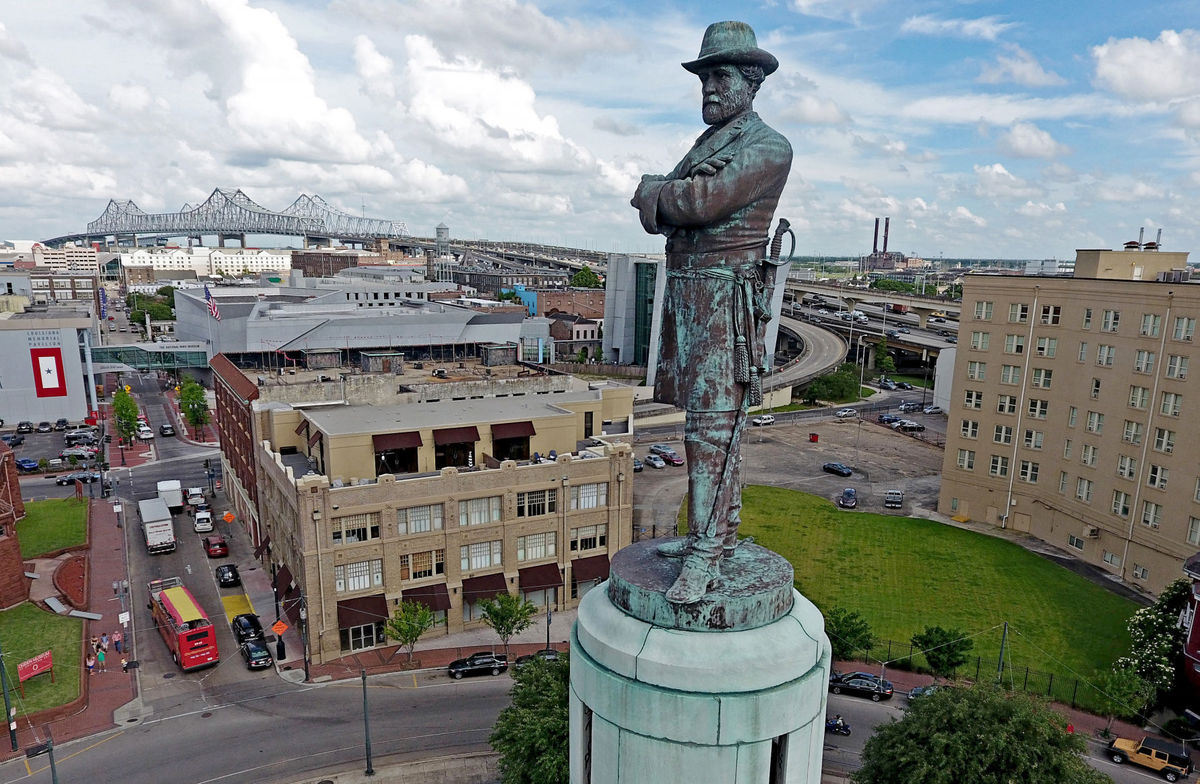 New Orleans Mayor Landrieu and the Politics of Redemption

If you haven’t had a chance to listen to Mayor Mitch Landrieu’s speech on taking down the last Confederate monuments in New Orleans, I strongly encourage you to do so. It was a welcome reminder, in this age of 140-character takedowns, that political arguments can be inspiring, even beautiful. And it was a reminder of the importance of the stories we tell about ourselves, each other, and the work we are called to do in the world.

The American story, like any story, is complicated, and often contradictory. James Baldwin wrote, “American history is longer, larger, more various, more beautiful, and more terrible than anything anyone has ever said about it.” Mayor Landrieu, in explaining the decision to remove statues of Robert E. Lee, Jefferson Davis, and P.G.T. Beauregard, sought to distill this story into a narrative of competing values: America, and New Orleans, as “a melting pot, a bubbling cauldron of many cultures,” on the one hand, and New Orleans as “America’s largest slave market” on the other. He spoke to the great, unresolved contradiction of America: that a nation founded on a belief in universal human equality was also founded on a belief in racial hierarchy, and erected one of the largest slave societies in the history of the world. And he proposed repentance, reconciliation, and redemption as the path through this contradiction.

The first step toward an honest reckoning with history is to understand this history clearly. The bloodiest war in American history was fought over whether a slave society would be allowed to persist. Alexander H. Stephens, vice president of the Confederacy, articulated the purpose of the Confederacy very plainly. Contesting the view of many of America’s founders that slavery was “an evil” that would one day “be evanescent and pass away,” he said,

“Our new government is founded upon exactly the opposite idea; its foundations are laid, its corner-stone rests, upon the great truth that the negro is not equal to the white man; that slavery subordination to the superior race is his natural and normal condition. This, our new government, is the first, in the history of the world, based upon this great physical, philosophical, and moral truth.”

Indeed, the right to persist in enslaving black people was repeatedly cited by the Confederate states as the reason for secession. A popular revision of this story is to suggest that the war was about the abstract notion of a state’s rights—which must raise the question: a state’s right to do what?

And yet, though defeated in battle, the American South largely succeeded in a campaign of revisionist history, which sought to divorce the Confederacy from its history of slavery and violence, and reimagine the Civil War as principally concerning the North’s aggression. The Confederate monuments in New Orleans were symbols of that revisionist effort. “First erected over 166 years after the founding of our city and 19 years after the end of the Civil War, these monuments that we took down were meant to rebrand the history of our city and the ideals of a defeated Confederacy,” Landrieu said. But the rebranding was a lie. “It is self-evident,” Landrieu continued, “that these men did not fight for the United States of America. They fought against it.”

For Mayor Landrieu, the Confederate monuments in his city had come to symbolize this violent history, and what came next: the thousands of lynchings throughout the country, the legal codification of ‘separate but equal,’ the Freedom Riders who were “beaten to a bloody pulp” upon arriving to New Orleans. Landrieu’s intention, however, was not to re-litigate the past, nor to make a concession to “political correctness,” nor to condemn the country to eternal shame. Rather, he encouraged us to consider what these monuments say about the country we are, and the country we must become. He proposed a new politics: not of blame, but of what the lawyer Bryan Stevenson calls a “politics of redemption.”

As any person in recovery from addiction will tell you, the admission of the problem is the foundation for growing into a fuller life. Once the problem is faced, change may begin. But to persist in denying reality, to retreat into self-rationalization, to ignore the harm caused by your continued ignorance—these behaviors are the prisons we too often build for ourselves, and for those around us. A sign of emotional maturity is to do what Landrieu suggests: “showing the world that we as a city and as a people are able to acknowledge, understand, reconcile, and most importantly, choose a better future for ourselves—making straight what has been crooked and making right what was wrong.” This is the heart of a politics of redemption: the ability to change. By taking down these monuments, Mayor Landrieu is doing much more than atoning for the Confederacy’s sins. An immediate result of removing the monuments is to repudiate what they stood for, and affirm the experience of Americans whose humanity the Confederacy denied. But the action has the possibility to do even more: by confronting defenders of the Confederacy with the painful facts of history, it creates the space for these Americans to reexamine their own assumptions. It is an invitation to us all to grow up.

In the most moving passage of the speech, Landrieu imagined what it might be like for black mothers and fathers to explain the presence of Confederate monuments in their city. “Can you do it?” he asked. “Can you look into that young girl’s eyes and convince her that Robert E. Lee is there to encourage her? Do you think she will feel inspired and hopeful by that story? Do these monuments help her see a future with limitless potential?” And then, the crucial question: “Have you ever thought that if her potential is limited, yours and mine are too?”

In closing, Landrieu invoked perhaps the greatest speech in American political history, Lincoln’s second inaugural. His choice of this speech was instructive. Lincoln understood the fallibility of human nature. He knew that the Union as a whole had allowed slavery to endure, and that the North and South alike “read the same Bible, pray to the same God, and each invokes His aid against the other.” For Lincoln, our fallen nature assured that we would often be wrong; but he also believed in our ability to correct course when given to know the truth. Landrieu quoted from the speech’s most famous passage: “With malice toward none, with charity for all, with firmness in the right as God gives us to see the right, let us strive to finish the work we are in, to bind up the nation’s wounds…to do all which may achieve and cherish a just and lasting peace among ourselves and with all nations.”

And thus Landrieu tied his removal of Confederate monuments to the story that Lincoln told about this country: a story of a nation committed to human equality, whose commitment to that proposition is repeatedly tested; a story of a Union that would stay intact, and in which people could live together, freely building lives of their choosing. It is a story in which the “work we are in” is never finished, and the possibility of redemption, of making things new, is always present. In these dark times, it can be easy to forget that this is a legacy we inherit, and that this story is still ours to write. In eloquently reclaiming this story, Mayor Landrieu did his city, and this nation, a great service.

I, for one, intend to read it again, and then try to live it.