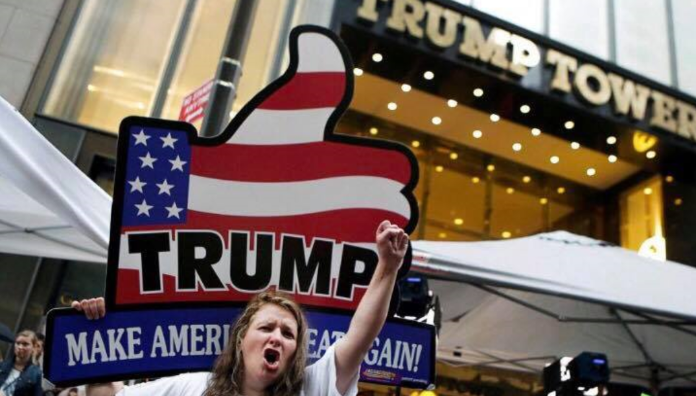 Trump, Comey and the Struggle for the Truth

A few nights before the 2016 election, I walked to Trump Tower. Kellyanne Conway was giving an interview outside the front door. She was surrounded by Trump supporters who had just concluded a day of calling swing-state voters. This was the final push.

I was sure that Donald Trump would lose. I was nonetheless fascinated with his candidacy as a political phenomenon. Before the election, countless words were devoted to the subject of Trump’s supporters, and perhaps more have been devoted since his improbable victory. I went to Trump Tower to meet some of his truest believers myself.

One woman had brought handcuffs. She waved them in the air as Kellyane spoke. They were, she later explained to me, for bringing Hillary Clinton to jail. Another man wore a cowboy hat and a brown blazer, checkered with buttons that alleged, among other things, that President Obama was a Marxist from Kenya.

Kellyanne disappeared into the lobby of Trump Tower to the sound of cheers.

As the gathered supporters mingled and chatted about their day of volunteering, I decided to try my hand at journalism. “So, what’s really going on with these emails?” I asked.

This line of inquiry led to revelations about polarization in this country that are hard to describe.

I was told that Hillary Clinton and her campaign chairman John Podesta were members of a satanic cult. (This allegation was apparently distinct from the claim, circulated on social media, that Podesta and Clinton were running a child sex-trafficking ring out of a D.C. pizza parlor. This “fake news” story led one man to bring a gun to the pizza parlor in question, seeking vengeance.) I was informed of President Obama’s secret plans to destroy the United States from within—a plan he had evidently failed to execute, being mere days away from the election of his successor and the United States still being largely intact.

The woman with the handcuffs took my hand, looked me in the eye, and urged me, with utter sincerity, to read John Podesta’s emails. Another woman expressed dismay that my generation, the generation that would suffer the consequences of today’s policies, was so uninformed about the politics of the day. I disclosed my intention to vote for Hillary Clinton.

“The media just doesn’t tell you the truth,” she said.

And I was a symptom of this dishonest, diseased political system. She pitied me, and gave me a hug before she left.

It is a cliché to note that we increasingly live in echo-chambers of our own creation, inhabiting unimaginably different political worlds. On this night at Trump Tower, I lived in a world in which Donald Trump could never be the president. His supporters lived in a world where he had to be president, lest the American project in democracy be destroyed entirely.

I’ve been thinking about my night at Trump Tower a lot lately.

The relentless barrage of fiction from Trump and his campaign served a purpose, which was to delegitimize sources of information that were contrary to the campaign and its goals. Like any campaign, Trump’s told a story. But its story was a particular national myth, in which the country was under siege by a global conspiracy, and Trump was the only man who could save the country from sure destruction.

With faith in traditional sources of information weakened, Trump’s most ardent followers were susceptible to believing this story.

“To abandon facts is to abandon freedom,” Snyder writes. “If nothing is true, then no one can criticize power, because there is no basis on which to do so.”

This past week, President Trump’s power has been criticized. He fired FBI Director James Comey, a man who was actively investigating the possibility of collusion between President Trump’s campaign and Russia. By his own admission, he fired Comey, in part, because of the FBI’s active investigation of the Trump campaign’s relationship to Russia. He has faced criticism from within his own party. Historians have likened this moment in Trump’s presidency to Nixon during Watergate. His approval rating is at a historic low for a president at this point in his term. It no longer seems implausible that Trump will not finish his term.

But no matter how this plays out—and much remains to be seen—the country will need to account for the existence of terrified people who are willing to embrace sinister narratives of national decline. Liberal democracy relies on some semblance of trust—trust that your fellow citizen is acting in good faith, trust that you can see and respond to same facts. When that trust is lost, the democratic project itself is imperiled, which is a prospect far more terrifying than anything my friends outside Trump Tower had asked me to believe.