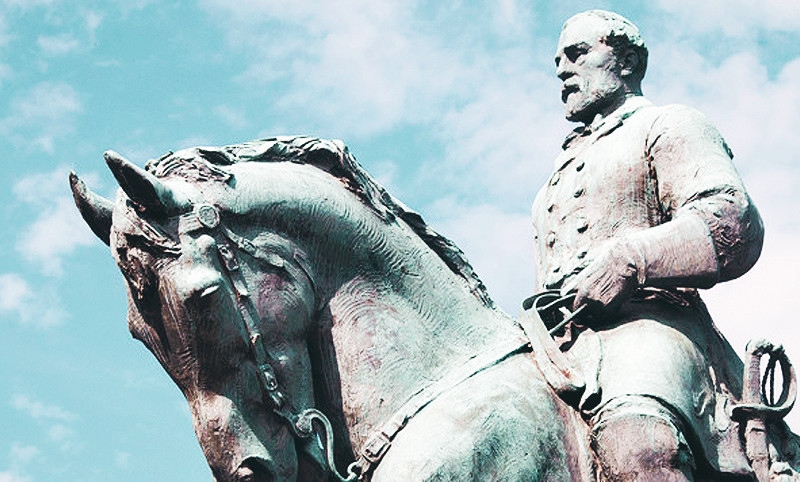 Taking Down Robert E. Lee on a Horse Will Not Help Solve America’s Race Problem

I hate to sound like a pessimist, but taking down statues that represent the Confederacy will do nothing to assuage America’s race problem. This is not to say that I believe that they should be kept erect; there are several reasons, which I’ll express, why they should be taken down; however, I am not sure taking them down will produce the desired outcome. Let’s talk about it.

Recently, I saw a Facebook post where a man erroneously tried to call out the hypocrisy of some Americans for wanting to take down Confederate statues by pointing out how the predominately black Detroit, Michigan sports a Black Power statue in the center of its downtown. To be clear, the statue in question is not a Black Power statue at all, but rather a replica of native Detroit boxing legend, Joe Louis’ fist, but that’s beside the point. After having read the post, though, and the undertone of “crybaby” that oozed from it, I could not help but question if pulling down the statues would do any good in moving the country passed its bloody roots.

To break it down, we must consider why we have statues at all. The short answer is for commemoration of some sort; typically, to show reverence to a person’s or event’s greatness. They are constant reminders of honor, virtue, achievement, and/or accomplishment. They help to ensure that the legacy of a person or an event continues to live on, despite death or ‘closure’. This is why statues of Confederate soldiers typically reflect a robust, valiant man, pointing forward or atop a horse, triumphant in all his glory; even if said soldier’s team did not win.

To Confederate supporters and sympathizers, however, winning is not the point. It seems that preserving the history and culture of that period is the focus and the reason why they demand that these statues remain erect. Even our president supported this stance with a tweet stating: “Sad to see the history and culture of our great country being ripped apart with the removal of our beautiful statues and monuments.” But, as (relatively) aesthetically pleasing as they may be, these monuments still represent the side of the Civil War that wanted to preserve the institution of slavery. So naturally, considering the ugliness these statues intend to glorify, the most logical solution would be to remove them. To topple them over in hopes that their legacies fall by the wayside along with them. But, it’s just not that simple.

Let’s say we remove every statue commemorating the Confederacy from the Bayous of Louisiana to the Mississippi Delta. We hold rallies and toast to these graven images being pulled over by the very ropes that were used to murder the victims of bigotry. It would feel good. It would feel triumphant. It would be empowering. But, for how long? Again, I am not saying the statues should remain erect. They should be taken down. But, I believe we have many societal and interpersonal changes to make before this symbolic representation of progress has any have real meaning. If we are to tear down these symbols of (hate) culture, with it we must also tear down the ingrained legacy of bigotry and division that they symbolize. And that still feels so far away…

I support the removal of these statues, but it feels only as if we’re putting a Band Aid on a deep wound. We pick fights over the short term solutions and ignore the actual issue at hand: the painful history that festers beneath the surface, silently plaguing our institutions. Lets take down the monuments. But let’s also tend the wound so real healing can begin.