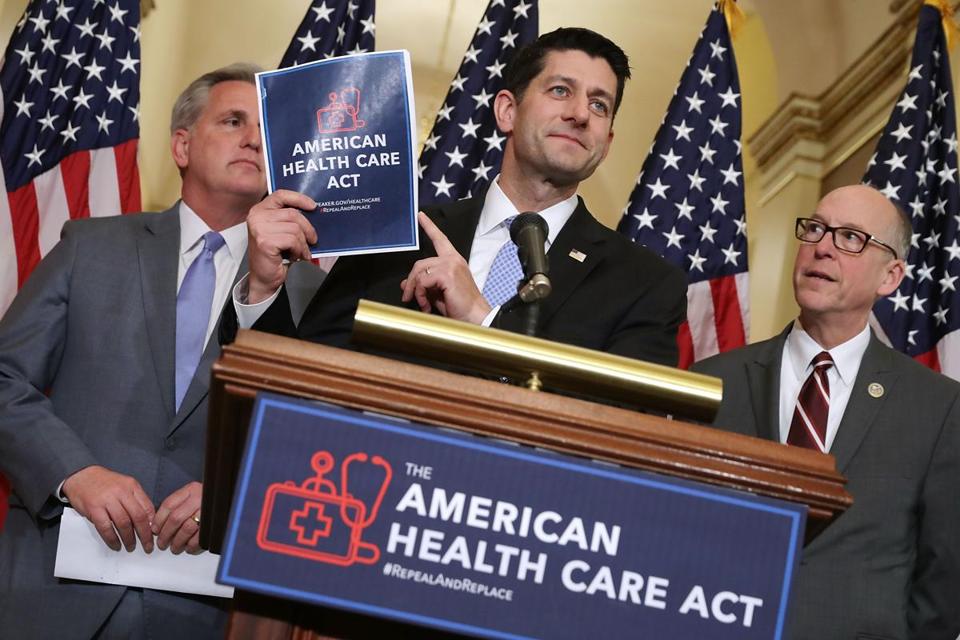 “A Nation of Takers”: Why the Republicans are still fighting to repeal the ACA

Despite rumblings of impeachment and the seemingly endless revelations of impropriety on the part of our Republican president, the Republican Party’s struggle to repeal their much-reviled Obamacare continues.

According to reporting by Politico, President Trump is contemplating ending federal Obamacare subsidies that go to insurance companies to reduce costs for low-income Americans, a move that would intentionally destabilize the insurance health insurance market and cause many to lose their coverage.

Meanwhile, pending a new score from the Congressional Budget Office (CBO), the House Republicans may need to vote again on the American Health Care Act (AHCA) to ensure that the bill conforms to the Senate’s rules on budget reconciliation. If it doesn’t, parts of the bill will need to be redrafted, and then the bill will need be voted on anew. The most recent CBO score indicated that the AHCA, if passed, would cause 24 million Americans to lose their health insurance.

The effort to repeal the Affordable Care Act deeply matters to Republicans in Congress; it is a natural extension of their worldview. This worldview is worth unpacking.

During the 2012 election, Mitt Romney, in his infamous “47 percent” remarks, spelled it out quite clearly:

There are 47 percent of the people who will vote for the president no matter what. All right, there are 47 percent who are with him, who are dependent upon government, who believe they are victims, who believe the government has a responsibility to care for them, who believe they are entitled to health care, to food, to housing, to you-name-it…And so my job is not to worry about those people. I’ll never convince them that they should take personal responsibility and care for their lives.

These remarks, recorded at a private fundraiser and leaked to the press, became a significant issue for Romney’s campaign. But they weren’t surprising: they are entirely consistent with what the GOP had argued for decades, and what they continue to argue today. The problem with the health care system, in this view, is not that the government fails to provide its citizens with access to health care; the problem is that too many Americans lack the “personal responsibility” to care for themselves.

In the midst of the AHCA debate, Congressman Jason Chaffetz crystallized this argument in comments on CNN. “And you know what? Americans have choices, and they’ve gotta make a choice,” he said. “And so maybe rather than getting that new iPhone that they just love and they want to go spend hundreds of dollars on that, maybe they should invest in their own health care. They’ve gotta make those decisions themselves.”

The Affordable Care Act offered a different vision of health care and the role of government. It was built upon the idea that the government has a role to play in protecting the vulnerable from the excesses of a market company, and it acknowledged the inefficiency of a market-based health care system in providing universal coverage.

“Left to its own devices, a market economy won’t care for the sick unless they can pay for it,” Paul Krugman writes. “Insurance can help up to a point, but insurance companies have no interest in covering people they suspect will get sick.”

So, the Affordable Care Act sought to expand coverage by regulating the existing insurance market, and expanding Medicaid. The law told insurance companies that they couldn’t discriminate against people based on preexisting conditions. and to offset the increased cost to the insurers, the law required all individuals to purchase insurance. People seeking to purchase insurance could shop for their insurance on a health care exchange. And for those who couldn’t afford to purchase insurance on their own, the law did two things: it offered subsidies to help people pay for it; or, if your income was at or below 133% of the poverty line, you could be covered under the Medicaid expansion. (This last provision proved most problematic, because states were allowed to opt of this expansion, and many did, which left millions of people without access.)

Since the debate over the Affordable Care Act began over eight years ago, its opponents have attacked it as an unprecedented intrusion of the federal government into the lives of Americans, as an attack on liberty itself. As Romney’s candid remarks make clear, its opponents are also motivated by the belief that a growing welfare state will drain the American people of initiative and personal responsibility. Paul Ryan feared that we would become a nation where “we have more takers than makers.”

Two weeks ago on this site, I described the centrality of racism in debates about any expansions to the welfare state, including Obamacare. Throughout history, the surest way to kill a proposed expansion to the safety net is to suggest that people who aren’t white will benefit from it. This was true of Social Security, which was secured only when domestic laborers and farmworkers were exempted from the benefit—both predominantly black occupations at the time. This was also true of the G.I. bill, which was only secured with the support of Southern Democrats, who helped retain state governments’ powers to deny the benefit to black veterans.

The less obvious point I tried to make was about how racism hurts Americans of all races, white people included. The Republican storyline of “makers and takers” and the “47 percent…who believe they are victims” has its roots in this history. The class of the undeserving has grown beyond its original parameters to now include, at least in Romney’s telling, nearly half the country: people “who believe they are entitled to health care, to food, to housing, to you-name-it.” This is important to understand. It explains how a member of Congress can truly believe that a poor American of any race would choose to buy an iPhone instead of providing health care for his family.

None of this is to say that today’s Republican Party is motivated by malice toward the poor or the sick. (Cruelty does seem to be a favored approach of the Trump administration, however.) From what I can gather, Paul Ryan is a true believer in the conservative orthodoxy he first embraced after reading Atlas Shrugged. And many of the Republicans who voted for the AHCA, and who may vote for it again, likely believe that less government involvement in the economy will be better for everybody.

But it is to say that the worldview from which their health care policy springs is built on sand; it crumbles upon inspection. It is a worldview that denies so much of what can be known about life and each other—that we are vulnerable, that life is fragile, that sometimes we get sick and need help, and it usually isn’t our own fault. And it denies people—people we know and love—of the dignity they deserve.

This Wednesday, the CBO will release a new score of the Republican bill, and the debate will rage anew. If you have a story to tell, it’s time to tell it. (I told mine here.) Call your representatives. Insist on your dignity. Help our leaders reclaim what is best in them. There’s still time.